Day 2
Boy oh boy did the heavens open up this morning – and stayed that way for the entire day. Didn’t know it was possible for so much rain to fall in one day. But at least it was warm.
DMZ & Panmunjeom
It was obscenely expensive and there was a bit too much waiting around but I would still recommend travellers to Seoul / South Korea take this tour. The morning tour to the DMZ started with a brief history of the Korean War and the current status on the North, South divide. Then came the first painstaking wait of the day – obtaining government clearance to enter the zone. Passed some lightly armed military men as we approached entrance to DMZ; nothing too scary. We were warned by the tour guide to stick close to her and we’d be safe from the 700,000 landmines that still lined the area. However, there was the reassurance that, in the unlikely event one did go off, we’d merely loose a leg but not our life. Okay then! The first real challenge of the day was the ascent out of the third tunnel. Getting down there was fine; the incline was incredibly steep but we were going downhill so not too strenuous. Walking, crouched low through the tunnel was fine; pity anyone over 5 ft 5 on this tour. But what goes down must come up and that’s when all the warnings against people with heart conditions etc. doing this part of the tour started to make sense. (As I write this blog the following day both of my butt cheeks are still in excruciating pain). 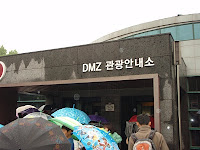 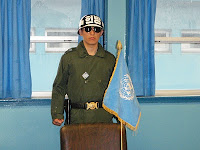 The 2nd part of the tour – Panmunjeom took place in the afternoon. We penetrated the DMZ further, coming even closer to North Korea until we could finally look across with the hope of catching a glimpse of civilian North Koreans. You could feel the tension between the soldiers of the North and South as we entered the JSA – Joint Security Area. The sinking of the South Korean ship in March was just the latest casualty in a long line of hostilities between the neighbours. 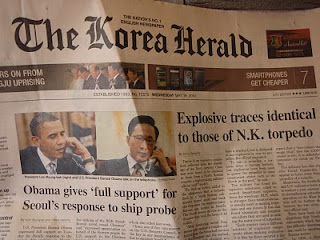 Camp Bonifas is the only military base I have ever stepped foot on. Security measures taken were beyond belief and we were warned that even our conversations were being recorded. A non smiling military man checked each passport thoroughly. Our shoes were checked (no slippers as you wouldn’t be able to run fast enough in case of an emergency evacuation), we had to transfer to a military bus (civilian buses not permitted on site). And despite the pouring rain umbrellas were not permitted as they posed a security threat. Yes, a mere umbrella could be used to mask a dangerous weapon. But it wasn’t all grim. Ladies will be pleased to know that they only selected the cuter soldiers to man these bases, so as not to frighten away tourists.

After a day of such intensity, a bit of retail therapy was in order. Lotte Departed Store did just fine. With floor after floor of brand names, it’s definitely worth a few hours of your time ladies. And then a gentle, romantic stroll along Cheonggyecheon Stream. It was so beautiful, peaceful and tranquil that it was hard to believe that the hustle and bustle of the city was just overhead. I ended the even with a seafood banquet in a traditional Korean restaurant. 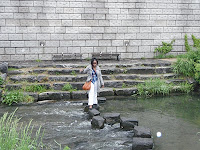 Goodbye Seoul
Today I said goodbye to Seoul. Was again impressed by Incheon airport. There are a few Korean culture centres were you can learn Korean calligraphy, see a traditional show and even learn to make Korean items. I made a beautiful hair-band and tried my hand at an old traditional game. Couldn’t leave the country without a final taste of octopus - much to my detriment. Not because I was eating octopus, rice and some weird miniature egg like things at 9.30 am, but because it was so spicy that I was in physical pain by the 2nd mouthful. But, as I had paid good money for it I refused to be defeated and despite being unable to feel my mouth I finished every last morsel. 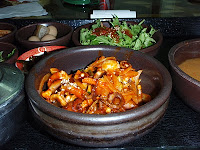 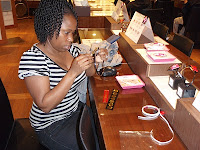 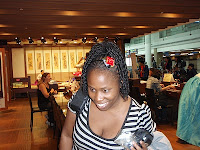 Eating silk worms The one thing I didn’t have enough courage to try though was the silk worms. I saw them being cooked, I approached them, I was offered some, I pondered.... but alas refused. Hey, if I do everything on this holiday they’d be no reason to come back! 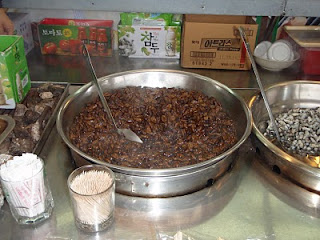