My husband has a new love

Konnichiwa Tokyo
Jumped on a limousine bus from Narita airport directly to the hotel Conrad in Shiodome. Effortless. Did very little that evening as it was raining heavily and I didn’t want to venture too far. That said, the hotel is based above a massive underground complex so it is possible to shop, eat and jump onto the metro without ever going outside. Woke up early the next morning to visit the world renowned Tsukiji Fish Market. I didn’t get there at 5am as suggested to catch the tuna auctions – after all, I am on holiday! Got there slightly after 6.30am (thankfully it was within walking distance of the hotel). High speed motorized carts weaved their way in and out the stalls making deliveries. One needs to navigate this market with real caution as a collision with one of these things could prove perilous. But the most surprising thing about this market is the absence of a pungent fish smell. I’m told this is because the fish is so fresh it doesn’t stink... hmm, I wonder what that says about the fish we get in London? 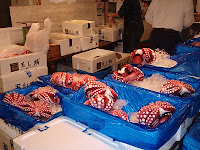 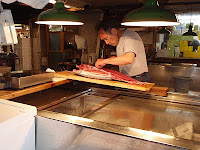 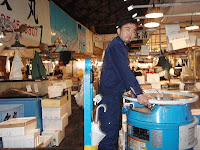 After breakfast I was dragged ...ooppss, I mean, asked to escort my husband to the Sony Building – a technology showroom. I would love to report that the experience was better than I thought but unfortunately it was just as mundane and dull as I expected it to be. A few pioneering Sony products, including what looks like a flask holder that doubles as an iPod charger. Whoop pee.... However, for gadget lovers it’s worth a look in I guess. But every cloud has a silver lining and it just so happens that the Sony building is located in Ginza a mega shopping street. I say no more.
Tokyo Tower by night was again slightly disappointing. The tower itself looks good from the outside when it’s all lit up but I felt going up to the very top was a waste of my time and money; considering you can go to the 45th floor of the Tokyo Metropolitan Government building for free and have the same panoramic views across Tokyo. Still, one must do some of these tourist things whilst on holiday. 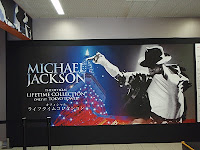 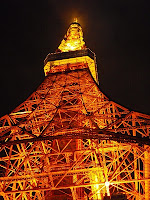 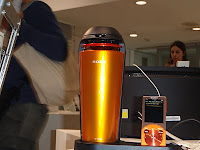 Sumo Match
The highlight of my trip so far though has got to be getting up close and personal with the sumo wrestlers at a live match at Kokugikan – The National Sumo Arena. I was badly mistaken about this sport. The glimpses I’d caught on TV always seemed like 2 overweight men hugging each other and moving around in a slow dance like manner. However, these giants move with such skill and you can even see the muscles defined in each leg. I was brave enough to ask one of them to take a photo with me – don’t ask me his name though as I have no clue of the pronunciation. Most bouts were over in mere seconds but the atmosphere remained electrifying throughout. Thanks to a little radio translator I hired, I was able to follow the proceedings and knew when to cheer. 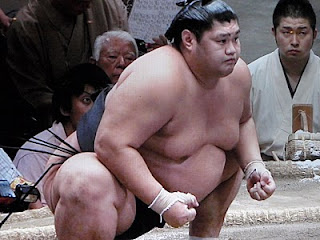 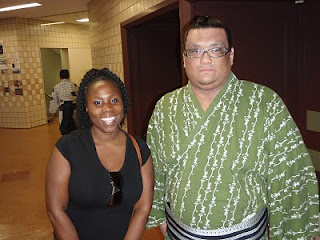 My husband has fallen in love. Thankfully not with one of the many gorgeous Japanese women we happen upon in which ever direction we look, but with an everyday facility; the humble toilet. Or not so humble in the case of a Japanese high-tech toilet. The one in our hotel room comes with heated seated, an inbuilt bidet and butt shower, automatic deodoriser and get this, some even play music! It is amazing though that in the same public restroom you can find such a high tech toilet, next door to the rather more modest (and award to use) traditional Japanese style toilets - a rectangular contraption on the floor with a sort of raised hood. 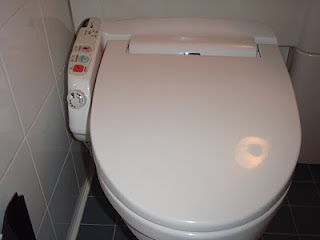 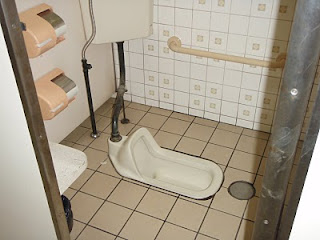 Tokyo is loud, fast and very expensive but it’s an amazing city. Oh, and during morning rush hour they are ‘women only’ cars on the subway – I guess to combat groping, which I understand is a major problem here.