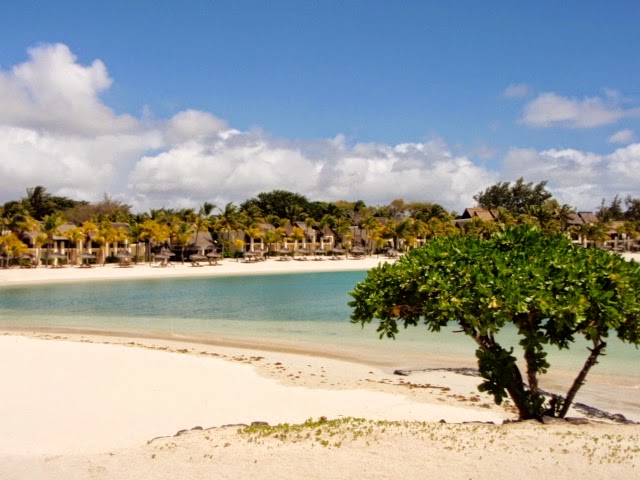 I’d always wanted to visit the island of Mauritius. It just looked so serene on a map, sitting there in the Indian Ocean and I had enjoyed the likes of Sri Lanka and Maldives. So when Emirates Holiday had an ‘offer’ to Le Touessrok for a week, as extortionate as it seemed, hubby and I decided to go for our anniversary. 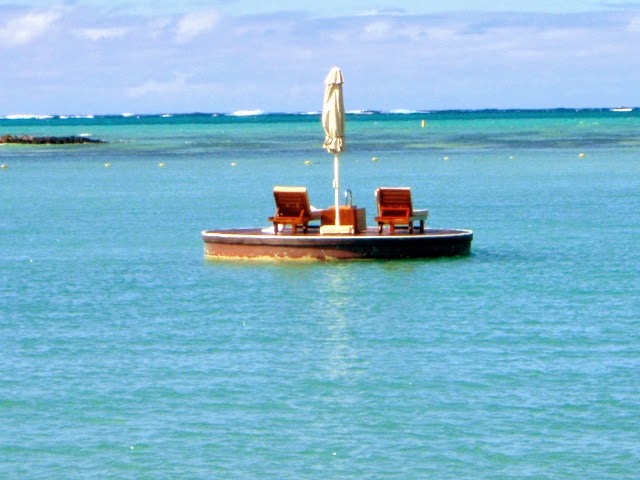 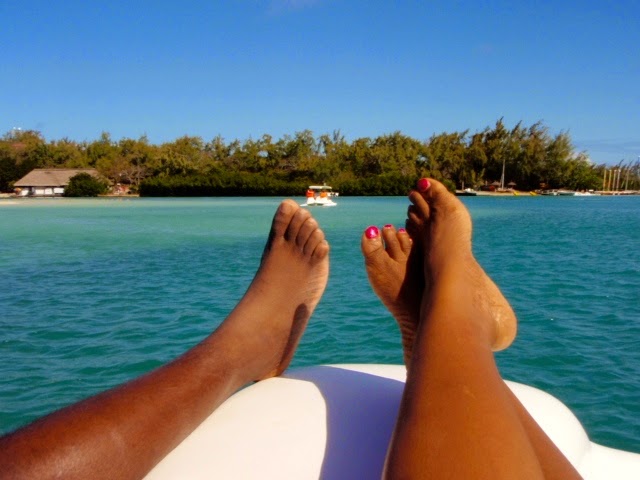 Normally I wouldn’t take an indirect flight if there’s an option for a direct flight but over the years I realized that the service on Middle Eastern and Asia airlines is far superior to that of UK, USA and other airlines. Amongst my favourite to date are: Cathy Pacific, Emirates and Malaysia Airlines (despite recent events). I love the way inflight technology is developing; good to know that if there were any urgent emails I needed to send during the flight I could with the in-air wifi. I didn’t though, instead I watched a couple of films and then slept a little. But was awake long enough to collect a few bottles of brandy. Not that it’s my tipple, but when they’re offering 50cl glass bottles of Hennessy, it seems rude not to accept – and slip them in your hand bag…in case they’re ever needed in the future (which in our case was sooner than I could have realised when hubby came down with a cold on the first night). 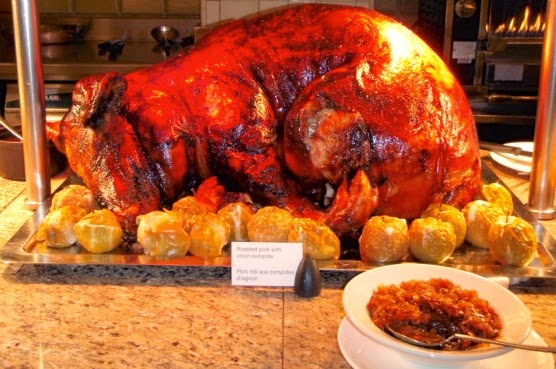 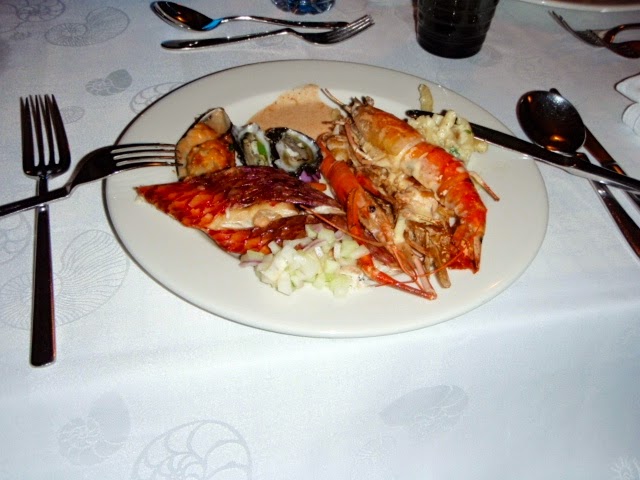 The two hour stop over wasn’t an issue as the lounge was very comfortable and it seemed the perfect opportunity to stretch our legs for a little while.

By the time we arrived at our hotel, LeTouessrok , we just wanted to shower, head to dinner and then hit the sack. The porter brought our bags to the room and then our own personal butler appeared, informing us of all the task he’d be carrying out for us. And then came the offer to unpack our suitcases, which I politely declined; a perfect stranger shifting through my smalls was a bit much.

As September is the end of the Mauritian winter, the weather was bad in the opinion of locals but to me it was all but perfect, minus the strong winds which did give a bit of a chill at night. Due to the weather, the water sports were cancelled for the first couple of days so we spent our actual anniversary on the private island of IlotMangénie. Owned by the hotel, it’s reserved for their guests and other than a restaurant for lunch, the only thing you can do on the island is relax.

As you’ll know from previous entries, I’m not the kind of person who enjoys relaxing on holiday so I soon familiarised myself with the various activities on offer. No one turned up for the Zumba, or the stretching class so it was like having a personal instructor. I managed to drag hubby along for the boxing so there were 2 of us. 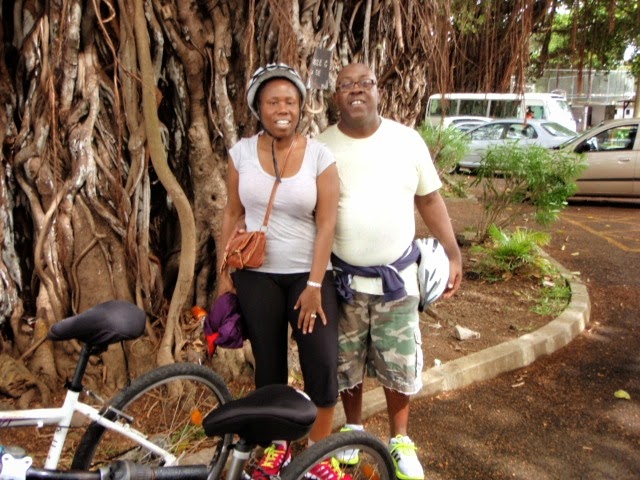 More people turned up for the bicycle ride to village of Bel Air which was a challenging but wonderful experience. While I’m happy to spin for hours each week at the gym or in the odd park when on holiday, taking a bicycle to the open road amongst traffic is not for me. So it was daring of me to try this in a foreign  country with, lets say, slightly more relaxed driving regulations than the UK. But praise God I made it to the village and back safely. It’s a shame the same cannot be said about my first attempt at waterskiing! 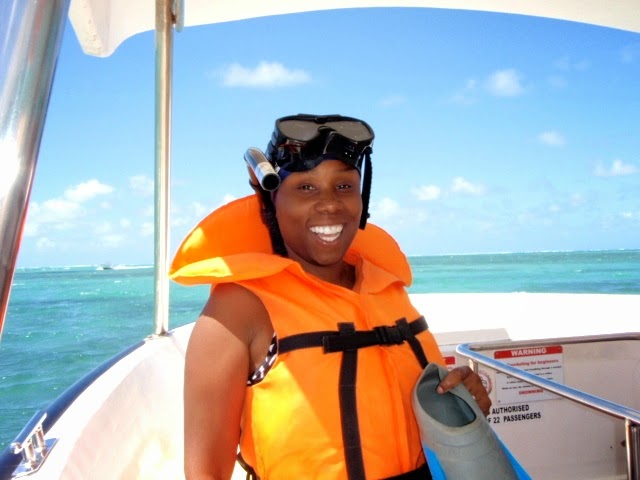 The day of my injury started as a sunny, warm day and we were happy that the all water sports were back on again. The snorkeling proved a major disappointment as we only came across the odd grey fish and some very unimpressive dark coral. That said, while waiting to commence the waterskiing, the colorful fish all seemed to find me. As it was my first time, I was given a quick crash course as to how to rise up out of the water once the speedboat started to tug. My main concern was whether it would hurt if I fell and hit the water but all the other first time skiers (who spent more time falling than standing) assured me it wouldn’t. With that in mind, I was fearless. 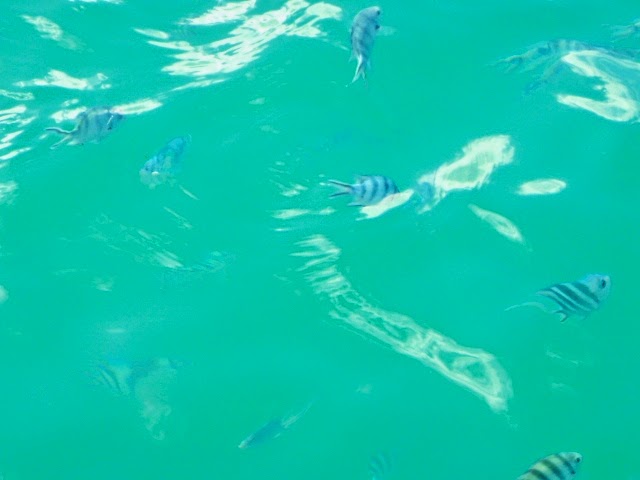 Hubby has decided that as he’s not a strong swimmer he wouldn’t attempt it, but as long as I have a life jacket I’m good so off I went. I’d like to embellish the story a little here and say that I was whizzing through the water doing somersaults on the skis and that’s how my injury occurred. The slightly less fascinating truth was that as soon as the speed boat pulled off, it tugged my leg violently into an awkward position and that’s when I felt it! A pain at the back of my thigh like I’d never felt before. One of the ski immediately snapped off and I was in such agony that I couldn’t even climb back onto the boat so the driver had to hold me by my life jacket and pull me back in (after he had of course rescued the over ski that had floated off). 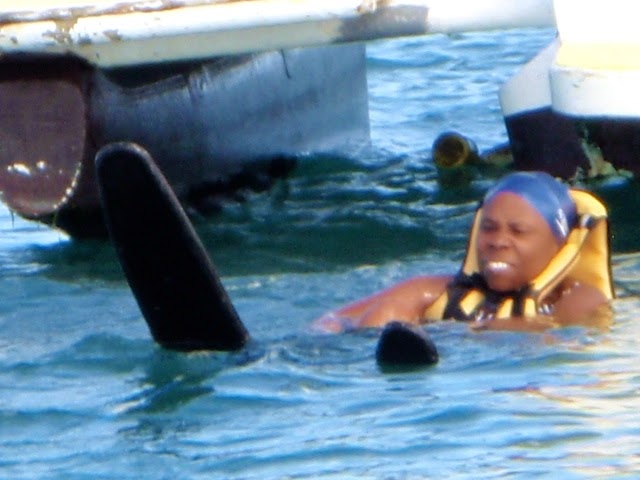 The speed boat drove us immediately back to the hotel where 2 security guards and hubby assisted me along the pier. I couldn’t walk so I just hopped. A buggy was waiting to take me to the hotel entrance but even trying to sit in it was painful so I just leaned on my side. I was met at the hotel entrance by a wheelchair which carried me straight to the medical room. The advice I was given was a little conflicting. The nurse who say me first advised I try to walk off the pain off (no chance), exercise the muscle and that some heat might help. The nurse I saw later disagreed and said I needed to rest the muscle and use an ice pack. Thank God for the NHSwebsite and their clear advice on how to treat a strained muscle; or in my case, a pulled hamstring.

Well, it seemed that hubby’s wish for us to slow down a little on this holiday had come true. The next day, one of my vacation nightmares became a reality – laid up on a beach for endless hours. I don’t want to sound ungrateful as it was a lovely beach on a 5 star, luxury resort where you could be serviced without having to leave your deck chair. But when I’m on holiday (or even at home) I’m the sort of get up and go kind of person, not sit around and lounge.

It seemed like that day there was a row of injured people relaxing on the beach – because they had no choice.  Next to me was someone who had twisted her ankle walking up the steps at the resort, another guy had injured his ankle playing golf, but the worse had to be a lady who had slipped, also playing golf, cut her leg and had ended up being air lifted to a clinic for emergency surgery. To make it worse, she was on her honeymoon. And I always thought golf was a relatively safe sport. 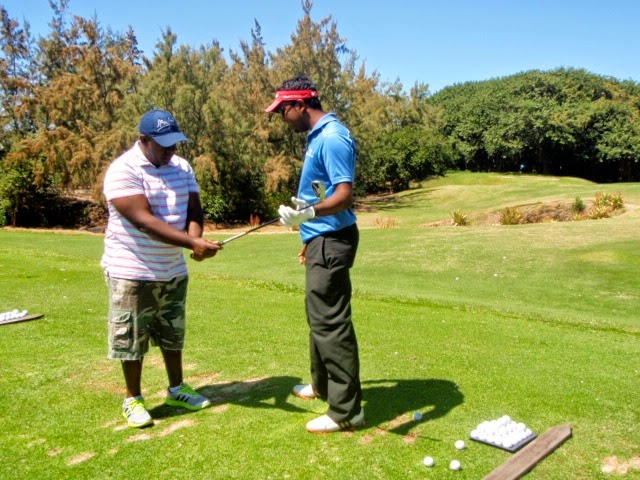 One day of being laid up proved more than I could handle, so the next day, as unwise as I knew the decision was, I somehow hobbled to the Le Touessrok golf course for an induction lesson. I’m not vaguely interested in the game but a)there was nothing else I could do; the bike tour I’d planned for that day was out and I couldn’t see properly so a car tour of the island was out b) this is one of the most famous golf courses in the world so I wasn’t going to miss the chance of a visit. It was also hubby’s first time on a proper golf course and by the end of the lesson, I had my very own Tiger woods in the making. 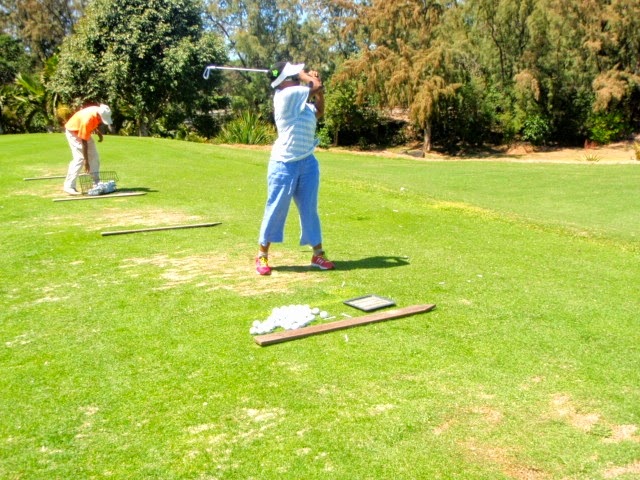 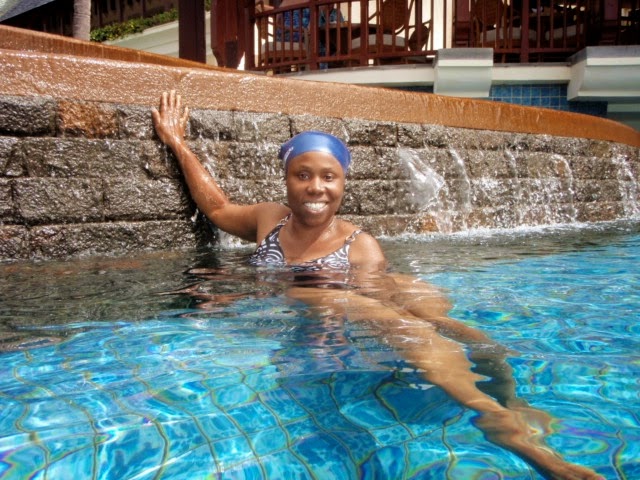 Other than the golf, the only thing I could manage was some water aerobics. The disadvantage to staying on such a large resort was the amount of walk time to get everywhere. Still, not one to sit around feeling sorry for myself, I made the most of what I could and was very grateful that the injury had occurred on day 4 and not day 1 of the holiday. 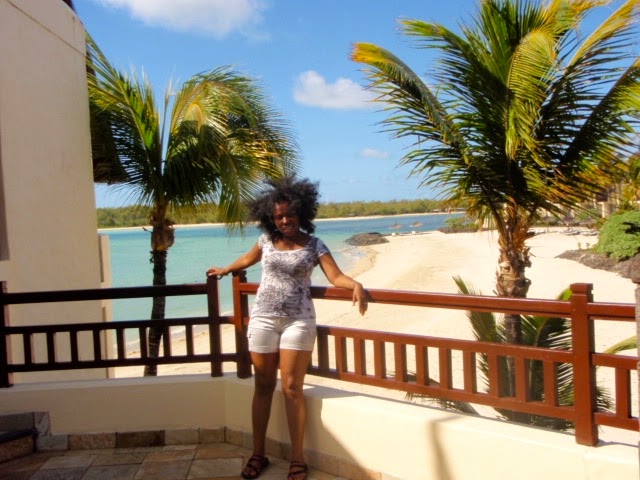 The walk to the lounge in Dubai on our way back and then to the connecting flight proved too much so, I had to swallow my pride and request assistance for when I landed at Gatwick. A wheelchair wasn’t quite how I expected to make my entrance back into London but as 1Thessalonians 5:18 says, “In everything things give thanks…” and I did, knowing it could all have been so much worse. 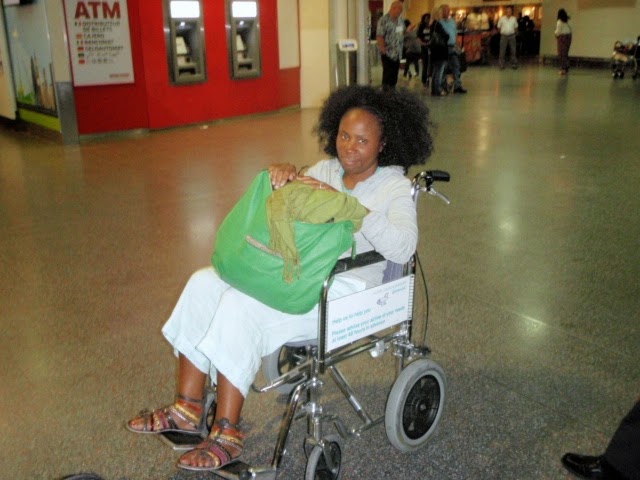