Abu Dhabi, Ras Al Khaimah and a quick hop across to Oman (Sep 2015) 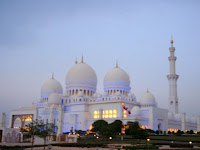 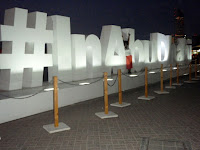 Back to the Middle East and I must admit that after Asia, it is fast becoming my favourite continent. The couresty, sense of safety and interesting aspects of the Arabian culture mean I feel at ease here. What I can’t get accustomed to though is the heat! I’m not a fan on anything over twenty two degrees generally, but unlike in the Caribbean where there is at least a lovely breeze blowing UAE has a very dry, humid dessert heat. 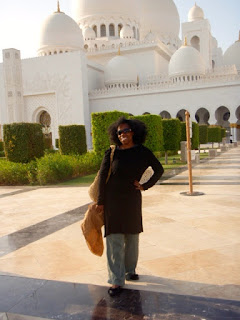 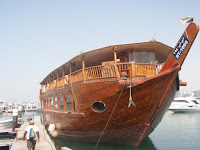 So first night in Abu Dhabi I felt like doing very little after arriving at the hotel just before nine pm. Thankfully there was a restaurant serving shawarma just opposite the hotel so that did nicely for a quick, light bite before bed. The next morning the full force of the uncomfortable heat hit me and so I chickened out in one of the many malls the city centre has to offer, The Abu Dhabi Mall, which was a six minute walk from the hotel (of course I used an umbrella for shade). Not much in way of the local items I wanted to purchase so after hiding from the sun for a couple hours I jumped into an air conditioned taxi and headed to The Sheikh Zayed Grand Mosque. Having explored several countries over Asia, I’ve seen just about every type temple there is so touring this mosque was an interesting contrast. It's one of the biggest mosques in the world and can accommodate 41,000 worshippers. There’s a strict dress code and if your clothing isn’t suitable you’re asked to wear a abaya (women) or thawb (men). I went a bit overboard with my outfit but I got in, no problem. After a visit to the restroom and rolling my sleeves up slightly to wash my hands, I was asked by one of the security workers to cover my hands, as my wrists were showing. Writs!! Non the less, they have their rules so…. The tour itself was a little more of an eye opener into the Muslim faith. The sheer opulence of the mosque again made me question just how elaborate any place of worship need / should be. But then to be fair, similar to Dubai, there seemed to be a lost of lavishness splashed around In Abu Dhabi, hotels, restaurants, car. And the lavishness doesn’t just stop at things, the goevrnemnet spends quite extravagantly on residents as well. Not only is there tax free income and free high quality health care but when an Emirati man marries an Emirati woman, he’s given 70,000AED (£14,000) to help with costs. So it seemed a bit odd to me that in a country with so much wealth floating around, had to ban service charge being added to restaurant bills (outside hotels) as the money wasn’t going to workers. 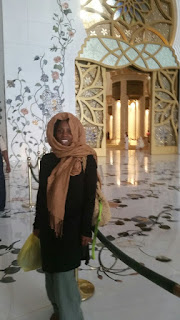 Insistent on always wanting to take a bus ride with locals while abroad I jumped aboard a bus heading to Marina Mall, not realising it would take over an hour to get there. It was interesting to see the women only seats at the front of the bus. It reminded me of the trains in Tokyo that has women only carriages at certain times of the day to tackle the huge issue of gropping.
Day two was another quick stop at the mall, the ac was just soooo tempting. Then on to a dhow ride. There was
no commentary as to what I was but it was a nice gentle ride and wonderful shade from the afternoon sun so it did nicely. I also came to realise that Arabic rap music was actually a thing. 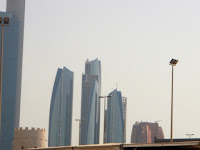 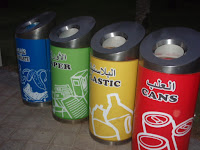 What I had been looking forward to most was a bike ride along the Corniche in the early evening but when we arrived, hubby really wasn’t up for it, so instead I settled on a long stroll. Not as satisfying in my opinion but just as beautiful. Stopped and watched the sun set along a stretch of the beach which was delightful. Jumped in a taxi and was back at the hotel in a very short space of time. Living in London, the only time I take taxis are too and from the airport (as it's cheaper than parking) but I love taxis in the UAE, cheap and in abundance.
Day three. After breakfast I packed up and awaited the luxury Lexus to arrive for the two hour drive to Ras Al Khaimah (thankful as they had estimated 2.5 - 3 hours). It was impressive watching the landscape change from built up city, to rocky mountains, to sandy dessert. I tried to keep my eyes opened for the entire drive but drifted off briefly. I arrived in Ras Al Khamaih (meaning 'top of the tent’) and I could see from the map that I was literally at the top of the UAE, where it borders with Oman and my first thought was ‘wow, wouldn’t it be great to go across the boarder for a day. That would be county number 45 on my world travel map!’ More on that thought later! 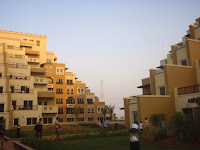 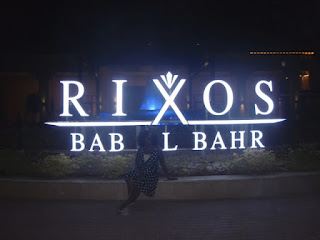 Despite not being a fan of all inclusive hotels, I had booked the Rixos for the next five days and it was refreshing to see a resort that looked every bit in reality as it did on the website. 5 star through and through. Everything spotlessly clean. Everywhere you looked there was staff shining and polishing making sure the hotel gleamed and sparked though out. It also helps I guess that the resort is less than two years old. The room itself was huge, booked for two but could have easily housed 5. The temptation to not leave for the next five days was too much and I more or less gave in. My daily routine consisted of breakfast, 11am pilaties, reading by the adult pool away from splashing, screaming kids with its own serviced bar, lunch, a swim (sea or pool) 5pm step areobis or belly dancing. Dinner varied each night at one of the five silver serviced Al La Carte restaurants. Thankfully I was only there for five night or else I would would have been stuck with the buffet which even though it looked grand, is not my first choice for eating out. Each night my tastebuds were transported from South American, to seafood, to Turkish to Italiain and finally Asian cusisine. The food was delectable and the service impeccable. I visited the mojito bar on a few occasion for a fruit mojito after dinner. The night entertainment varied but by night four, it was time to leave the resort and venture further afield after dinner. And what better venture than shopping! But I didn’t settle for the glamorous mall nearby. I opted for the Kuwaiti Souq where plenty of
haggling and bargains awaited. (Again, you just have to love the prices of taxis. A 25 minute drive from the hotel costing 50AED, less then a tenner! Cost more than than for the eight minute drive from my local station home. But I was in the land of oil!). Three pairs of shoes, three dresses, some kajal eyeliner and gifts and I was semi-satisfied. Hubby had had enough and I was dragged, protesting, into a taxi. Which was just as well because I had to be awake and packed by 5am the next morning. As I mentioned above I was eager to go across the boarder to Oman, but had to be in and out in a day. A visit to the trusty forum on Tripadvsior provided me with the name of a company who offered day trips and covered the cost of entry into Oman. An early check out and Khasab Tours arrived on time. The drive from the resort to the boarder was less than two hours. This is how the process went - exit papers and passport stamp at the UAE boarder, then over the the Oman boarder, entry papers and passport stamp. But finally I was in Oman and can now say I’ve visited 45 countries (still more than 100 to go). One of the first things that fascinated me was the exchange rate. Of all the countries I’ve visited I never received mere pennies for my pound so a rate of £1 to 0.56 Omani Rial was surprising.

The Musandam peninsula is an enclave of Oman and the area I spent the day was around Khasab, the capital. A few minutes after crossing the boarder, the difference in landscape was apparently. The cliffs rising out of the sea looked majestic and I could see the fjords off in the distance. Smiled at the little goats playfully running around. Eventually reached the harbour and boarded a dhow. Carpet lined the entire floor and cushions were spread all around, making it extremely comfortable. Must be hard work for the crew though as they take them up each night. Hubby and I were the only non Germans onboard but the tour guide (of Pakistani origin)  did a great job of flicking between the languages as he explained the fjords, villages we were passing, local customs etc. My favourite was the explanation of the little speed boats we saw coming and going. They were operated by smugglers. I immediately conjured up images of drug or even refugee smugglers but no, they smuggled goats in from Iran and they took electrical items out with them! The guide pointed out the police station and said they had the best job ever because they slept all day and turned an intentional blind eye to the 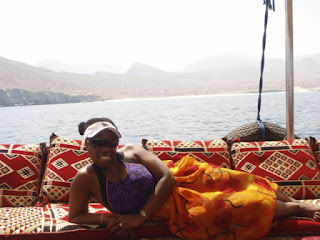 comings and goings of these boats. Another interesting fact was that the Sultan of Oman gave the inhabitants of these small fishing villages free electricity and entire rights for selling anything caught in the surrounding waters, to keep them from leaving. But the highlight of the entire day and in fact the entire holiday was seeing dolphins up close and personal, something I never thought about seeing in the middle east. The video and photo don’t do it justice. I don’t know how many there were in total but at one point they were four swimming in unison alongside the boat for almost ten minutes. Even I, the most non animal loving person I know, couldn’t help gasping at the gorgeousness of mother dolphin swimming alongside her baby. Stopped twice for snorkelling amongst the fish and had a meal onbaord. I was so relaxed on the comfortable cushions that I fell asleep briefly on the journey back to the harbour. The water was so gentle and calm with a glass- like look. Passport stamped to exit Oman and stamped to re-enter UAE and I was on my way back to hotel to shower, dress, eat and await the car for the 45 minute drive to Dubai airport. A quick visit to duty free to spend my remaining 80 dirham before relaxing momentarily in the airpot lounge. 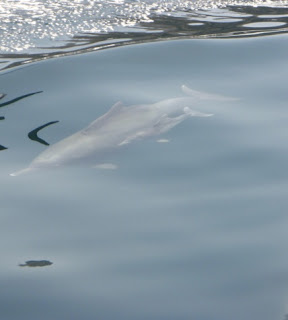 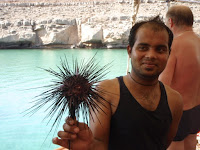 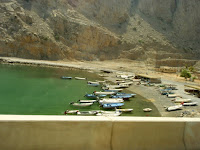 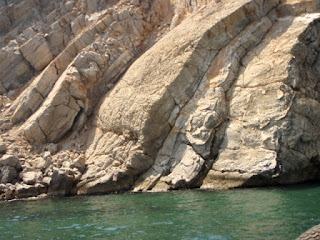 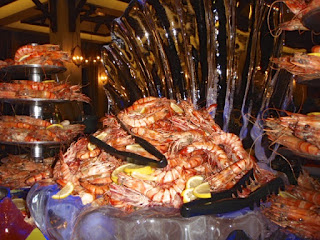 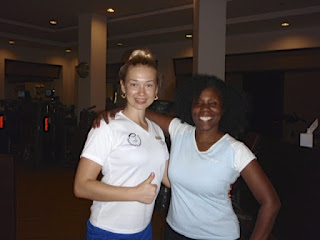 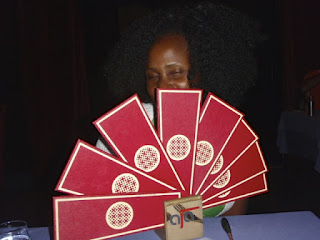 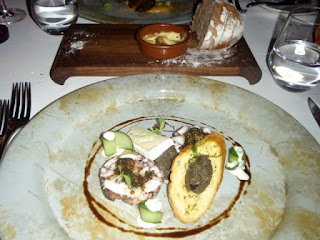 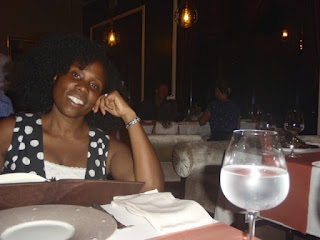 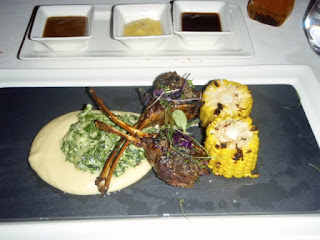 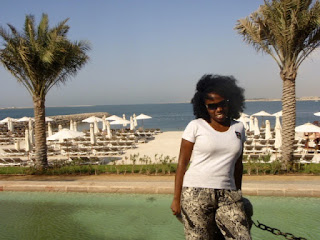