Sisters are doing it in Jersey 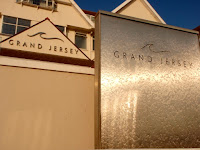 My sister and I have birthdays four days apart so decided to celebrate with a three day spa break in Jersey. With a population just short of 100,000, and measuring 5 miles long by 9 miles wide, Jersey is the largest of the channel islands. It sits in the Bay of St Malo 19 miles off the French coast and 85 off the English coast. Praise God for valet parking where I just drove to departures and had someone meet me to take the car. Faffing about with parking and then making your way to the terminal at 6am is not the one! Departed Gatwick at 7am and landed in Jersey 45 minutes later. Straight out of the airport and onto the number 15 bus which runs to St Helier. I boarded the bus and asked the driver if he could tell us when we got to Grand Jersey Hotel. Here’s how the conversation went:
Driver: The Grand Jersey, that’s a very posh hotel indeed. You must be a millionaire.
Me: Billionaire mate, get it right.
Driver: Well, I know if I had millions to spend I wouldn’t come to Jersey. 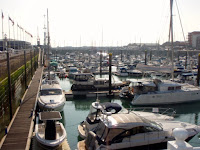 Just as well he’s not head of marketing for Jersey Tourist Board… But he wasn’t the only one, our tour guide a few days later asked what job I did that I could afford to stay at The Grand. Choosing not to read too much into the statement directed at a young(ish) black woman I just said it was cheaper than staying at some of the spa’s in London and left it at that. 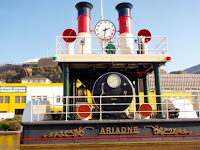 Sitting upstairs on the bus from the airport to St Helier gave a panoramic view of the island on the forty minute drive. From quaint little houses and narrow roads to large sprawling properties which I couldn’t decide if they were guest houses, small hotels or large homes. I later came to learn that some were apartments but many indeed owned by the millionaires of Jersey - which has more millionaires per square mile than anywhere in the world other than Monaco. This also helped explain all the expensive sports cars I saw flying around the island being driven by 60 plus year old drivers.
Arrived at the hotel before 9am expecting just to drop the bags and head straight out but as the room was ready I headed straight up. From the room to the spa. After a swim, a steam, a sauna and a bubble in the jacuzzi it was time for a short afternoon nap. Not something I’d do normally on holiday but I had been awake since 3am so a quick nap before heading into St Helier was okay. Plus too my travel partner, aka sister, is one for relaxing and sleeping lots on holiday (hence why we seldom traveltogether :) Unfortunately the Tourist Information Centre was closed until the following week; and so too I came to realise were many other things. Still being here off season has its advantages. No where was busy. Service was quick in stores and restaurants. We had virtually private use of the spa on every visit and there were even a few offers to be had like buy one get one free on gelato milkshakes at Joe Delicious. Then there’s the free parking between Oct and March.
The restaurant I’d been hoping to eat at that night was closed. Apparently the weekend can stretch to Mondays in Jersey so Tuesday is more like a Monday when everything is quiet. There was a lovely Thai restaurant a few doors down which again was very quiet so quick service. 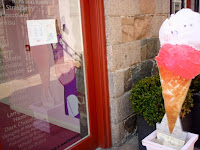 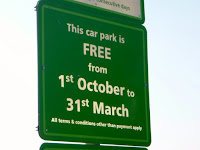 Day 2 started with a 15 minute treadmill speed walk and 6 lengths in the pool before breakfast. Had I known I’d go for breakfast in such a big way I would have spent longer! It’d been a while since I had a good full English so I just went for it - white toast, 2 fat sausages, bacon, fried eggs, bean juice (hate baked beans, like the juice) and let’s not forget the croissant, oh and the fruit to start, and the beetroot smoothy and the 2 cups of hot chocolate. Waddled out of the restaurant and to the concierge desk. Was going to head out around the island on a self guided tour as the tour company I wanted to use was closed until the end of the month. The concierge recommended another company who could do a tour the next day which we agreed to but came to regret - more on that later. So the day was spent exploring St Helier some more with a walk to the indoor historic market; absolutely beautiful and then the fish market which wasn’t as impressive as it had been made out to be. I wouldn’t normally squeeze in a cinema visit on such a short trip when there were so many other things to do but my sister really wanted to see the latest in the Divergent series, Allegiant, and as there was a Cineworld less than 5 minutes from the hotel I couldn’t resist using my Cineworld card in Jersey - the furthest I’ve used it as yet.  After munching my way through 3/4 of the large bag of popcorn I was meant to be sharing, I snuggled up and fell asleep until the end of the film as I really wasn’t that interested in it. This little nap invigorated me for the walk to Elizabeth Castle. 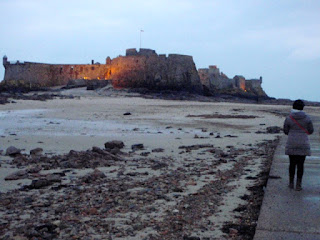 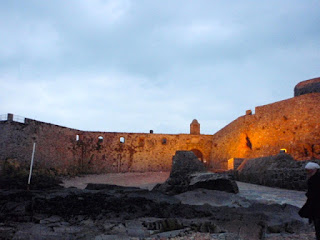 The castle is out to sea but it’s possible to walk there and back at low tide. Second to Nova Scotia - or 3rd depending on your source of info- Jersey has the highest rise and fall of tides in the world. I did my research and headed out around 6pm which gave ample time for a leisurely walk along the footpath; some time to explore the exterior of the castle as again it wasn’t opened until Easter; and a leisurely walk back to Bellagio’srestaurant. Italian isn’t my favourite of cuisines but as I’d recently stayed at the Bellagio Hotel in Vegas the name stuck out for me. Was greeted by Victor with a loud, enthusiastic Italian welcome and seated in the tiny restaurant. My main of king prawns in white wine was amazing. Four huge prawns cooked perfectly in a delicious sauce. Tash enjoyed her salmon fish cakes just as much and the table next to us, two older couples, were intrigued about the grunts of contentment coming from our table. We entered into a conversation with them and before the end of the night we were all chatting and laughing away. Victor was hilarious with his menu recommendations. The lamb shank I ordered for my main went from an ‘excellent dish’ to a ‘great dish’ to a ‘good dish.’ He recounted stories of his time spent in Stockport where he met his wife. The meal was highly entertaining from start to finish and I could hardly believe that a three course menu of that standard had come at the price of £15pp plus service. The ten minute walk back to the hotel seemed a lot longer as my stomach threatened to pop at any moment. 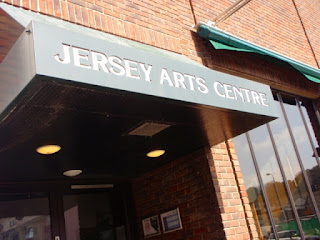 Needless to say breakfast on day 3 was much lighter. I went for the salmon royale instead of full English - although I did also get one of the huge sausages from the buffet - oh and the sugar filled blueberry muffin but only one cup of hot chocolate…I guess the intention was good. The full day island tour took us to St Aubin, St Brelade, La Corbiere, around the West Coast to the top of the island and back down the east. Our last stop was Gorey and the castle there lookedslightly more impressive in build than Elizabeth Castle, although it was on land so not the distinction of being surrounded by sea. The tour was a let down. My sister and I must have brought down the median age by a good twenty-five to thirty-five years and as such it was extremely slow paced and it wasn’t as educational / informative as I would have liked. But I did learn that Jerriais, the traditional French Patois  language of Jersey, is slowly dying. I did enjoy seeing the Helping Hand Sculpture at La Corbiere Lighthouse and I loved the beautiful, sparkling blue sea waters that could have easily been in the Caribbean. 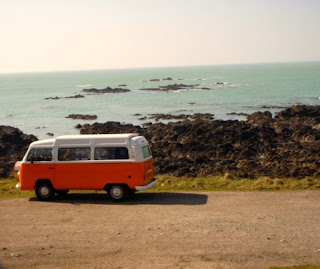 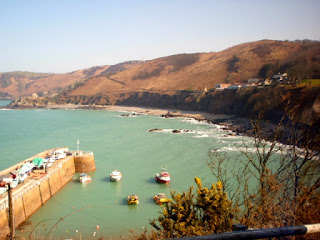 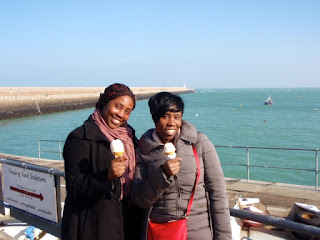 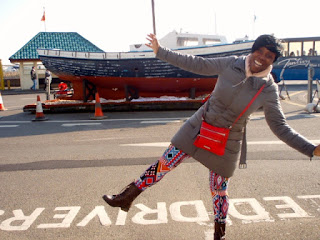 The spa just needed one last hour of my time before jumping onboard the bus and heading back to the airport. I often get a private transfer if it’s a longer flight but I love buses where you can chat to locals. Like the woman on my left from Liverpool who had been living here for 21 years but still went back to Liverpool ever so often with her teenage son to shop. Or the woman on my right form Austria who came here forty-five years ago for a two week holiday and decided to stay. Great little island and I will most definitely return one day I’m sure, especially as I didn’t do the main thing that was on my list - The War Tunnels.