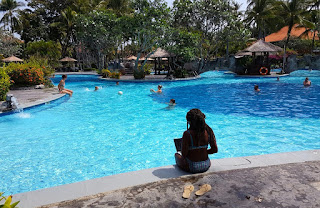 I opted to stay in the pristine, luxurious resort of Nusa Dua. I absolutely adore Asia and try to visit at least once a year but the situation with dogs means I find it hard to totally relax. This time I didn’t want the constant headache. The resorts in Nusa Dua are lined up along a beautiful beach. I could walk, frolic in the water, explore and not have to worry about the four legged beasts - while within the gates of ND at least. A visit to one of the local villages was another story (more on that later).  The response to the 2002 Bali bombing in which 202 people, mostly tourist, lost their lives led to security checks for any vehicles entering this area and greater checks before entering the the hotels. Not so in other parts of the island but even on my travels outside Nusa Dua, I didn’t feel unsafe at any point. 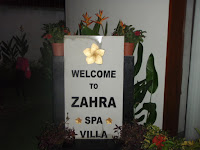 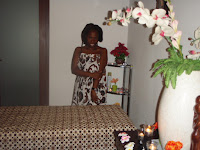 I began this trip with a three and a half hour relaxing message. Zahra Spa Villa offered a complimentary round trip to their spa villa. First was a Balinese massage that seemed very similar to a Swedish massage, followed by my favourite; hot stone massage. The trio ended with what was meant to be a reflexology massage but felt like a nice, hour long foot rub while sipping on milky ginger tea. I thought I wouldn’t enjoy it from the look but it was sweet with a strong kick of ginger. 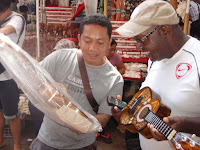 Ubud. I spent a short amount of time at the Kings Palace but to be honest, I’m a little templed-out from all my visits to temples in this part of the world so there was only one I was interested in seeing this time round. From there I crossed over to the large market.  On sale was everything from clothing, scarves and jewellery to carvings, souvenirs and food. I purchased a few items, well haggled for of course but as was expected there were several dogs wondering around so I didn’t spend too much time here. Besides, I really wasn’t interested in too much shopping on this trip. 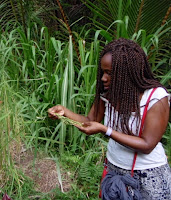 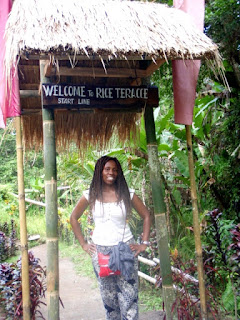 High on my agenda was a rice field visit. I didn’t fit one into my schedule last year in Vietnam so I was eager to get it in early this time round.  The Tegalalang Rice Terrace came up as the most popular in our vicinity.  There was a steep decent down through trees and foliage to reach the start line. Halfway down I remembered I hadn’t sprayed repellant that morning so I spray every inch of open skin before continuing. The sun was hot but it was worth the effort to finally see rice growing on stalks.  The walk back up was slightly more of a challenge and I was dripping in sweat but it was a case of mission accomplished.

Volcano. It was a long drive to reach but the view, though pretty, was disappointing. I had a drink at a restaurant on outside tables with the volcano as a backdrop but I’ve seen more impressive. Still it was nice for a short break.

Tanah Lot. As mentioned earlier I’ve become bored with seeing temple after temple of visits to South East Asia but I wanted to see this one solely due to its location. Situated on a large offshore rock, Tanha Lot literally means land in the Sea. This is arguably Bali’s most famous tourist site - if the crowd on the day I visited was anything to go by. It makes for spectacular viewing as you watch the waves batter around it.

Water Blow. I took a short walk with a member of staff from my hotel one morning where I was able to witness the 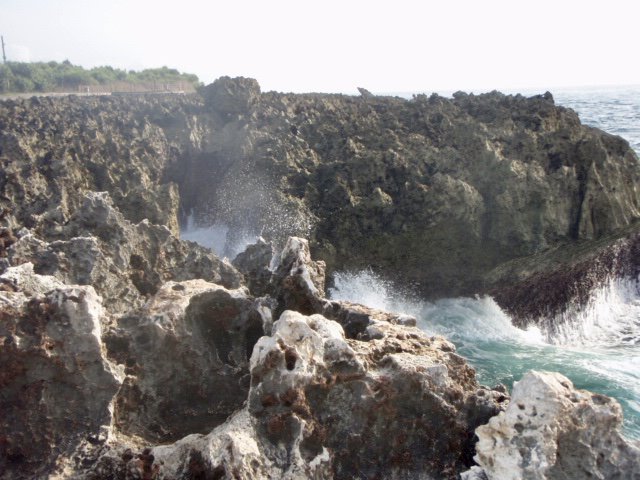 sheer power of nature as huge waves crashed around the rock. He told me the heartbreaking story of a couple who, on their wedding day had wanted pictures with the crashing waves in the background. There had been a little bride you could walk over and they stood on it waiting for the perfect shot. Unfortunately when the large wave occurred, it was completely overpowering and threw them off the bridge onto the sharpe rocks below. Neither of them survived. I thought of how harrowing it must have been for their guests and photographer to have witnessed this. In response the government had ordered the removal of the bridge. Hence the closest you could not get was the viewing deck. Good enough for me. But there were still warnings as some people were known to climb directly onto the rocks.

Guided tour of Adat Bualu village. Apart from my visit to Ubud, my trip so far had be relatively stress free on the dog front but it was about to come to a abrupt halt. I asked my guide about the dog situation before setting out, he said there were some but not a lot. And it the grand scale, yes, the five I spotted weren’t a lot but I’m sure they smelt tourist blood! I enjoyed seeing the village. A very different side of life to inside the pristine walls of Nusa Dua but I couldn’t relax and take it in as much as I would have liked. Street traders making and selling ‘offerings’, big business in Bali. Temples built at round about because where four roads meet it’s the meeting place of the guardians of direction Dikpalas. 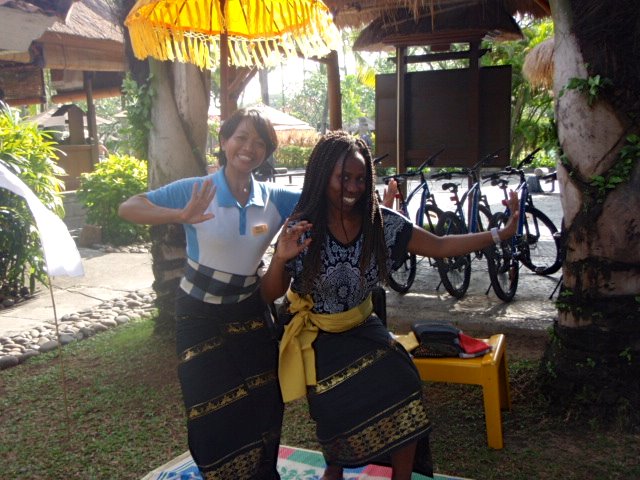 Balanise dace lesson. I love to dance and I have an appreciation of dance in various cultures so here was my perfect opportunity to take a lesson in one of the traditional Balinise dances. My instructor wanted me to show her so of my dance moves afterwards and I had as much fun teaching her some moves as I had learning hers. 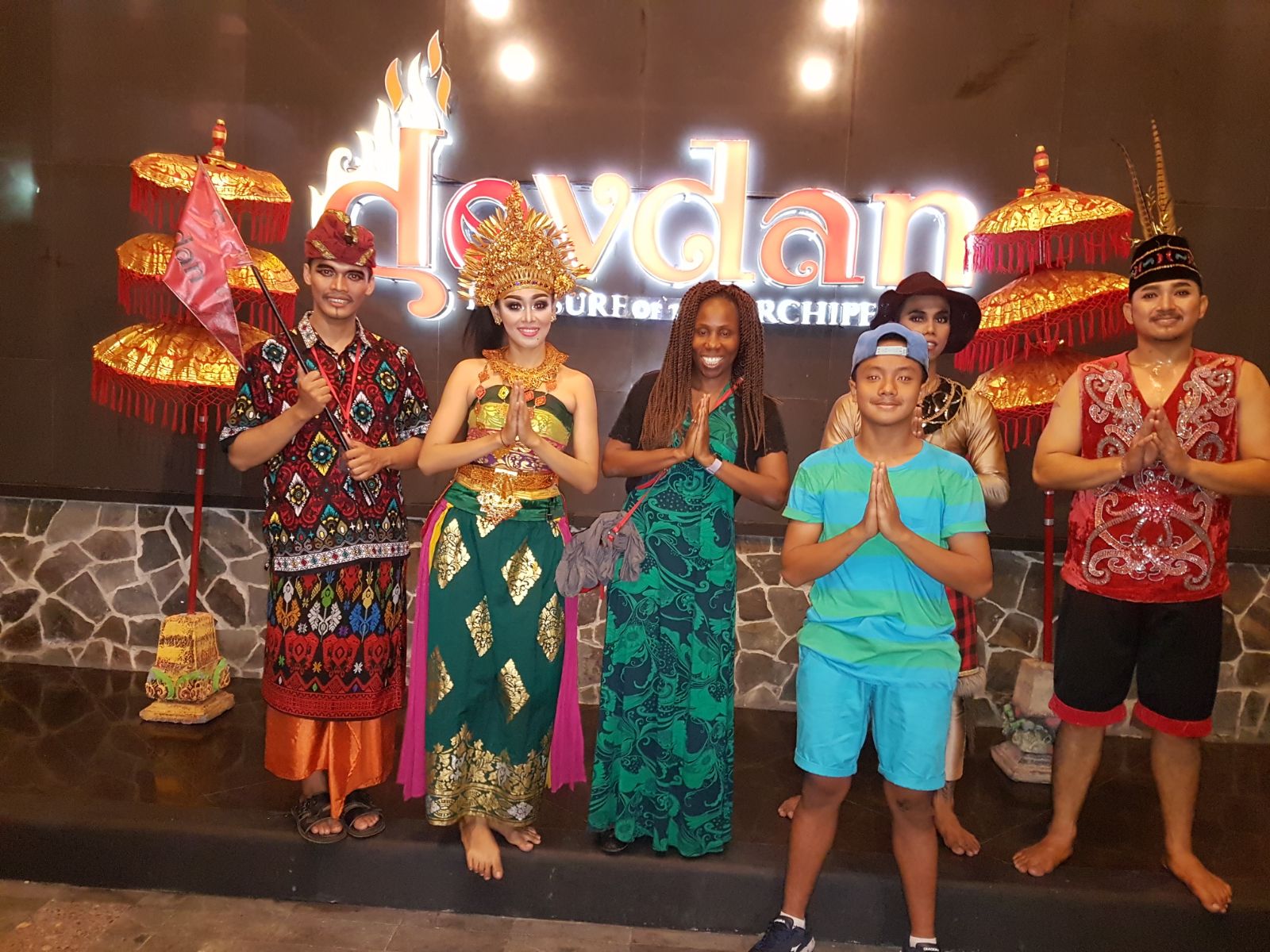 Devdan show. As afore mentioned, I enjoy dance in various cultures. In Russia I attended the ballet, in Seville a traditional Flamenco dance show as well as shows in Thailand, Cambodia and Barbados to name a few. So as The Devdan theatre was literally next door to my hotel, I decided to attend. The narrative was in English so very easy to follow.  Not the most mesmerising show (I go to West End shows frequently) but very colourful, nice smooth set changes and very skilful dancers. A little pricey but an enjoyable 90 minutes and a nice way to see the various cultural dances in a very comfortable environment.

Museum. There’s always time for a bit of art culture while abroad and I found some at Museum Pasifika

Food. As ever, food plays an tremendously important role in travel for me. Unfortunately I didn’t find as many culinary 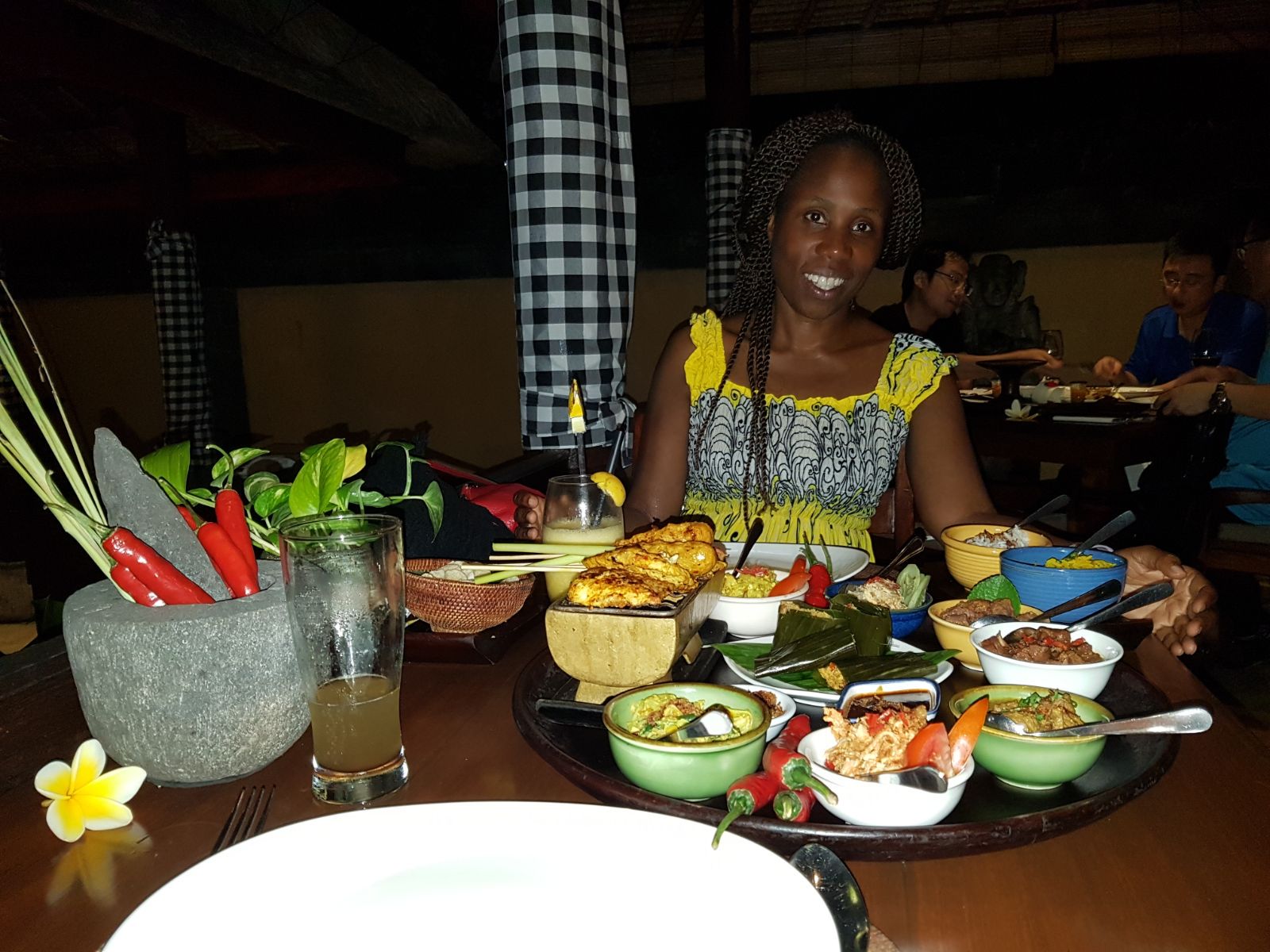 delights here as I have in other Asian countries but there was one restaurant that surpassed others. At Bumbu Bali One I received by far the most enthusiastic greeting ever received upon entering a restaurant! We went for the Balinese Rijsttafel which comprised of 12 different local dishes. The pork in sweet soy sauce was amazing and by far my favourite. There were a couple of dishes I didn’t like but was happy all the same that I got to try them. Just when I thought I could eat no more, the dessert platter showed up. Some of the desserts were again hit and miss but I absolutely loved the little rice flour dumplings in palm sugar sauce. 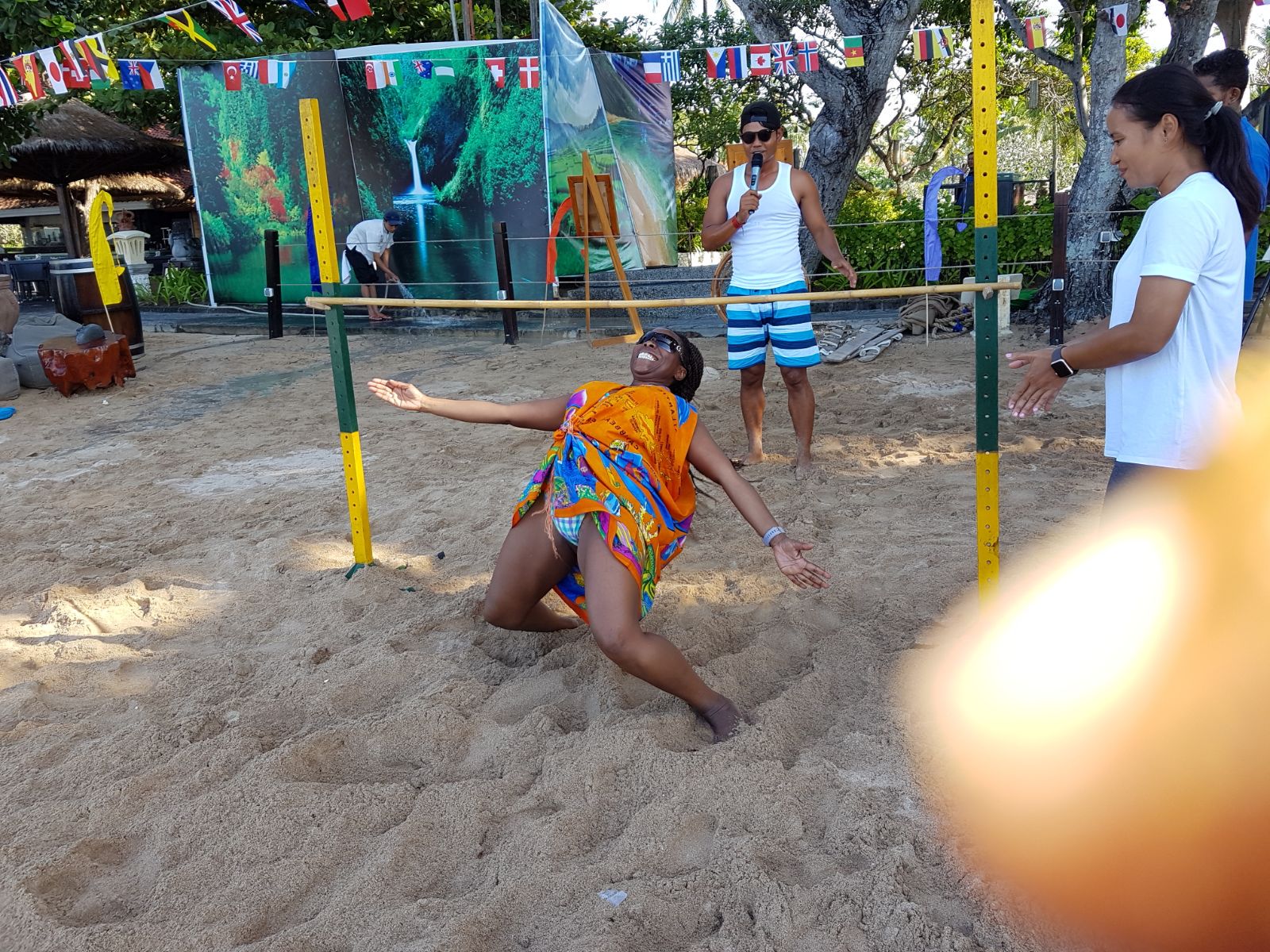 I’m not on to generally lounge about a hotel when there’s so much to see and do in a new country but, as I was once again paying for the luxury of a five star resort I thought it would be prudent to enjoy a few of the benefits. I tried to do the early morning exercises which started before I left the hotel. Pilates, early morning power walk and aqua aerobics. The pool was phenomenal - and I’m by no means a swimming pool fan. This one was beautifully laid out and the surrounded by flowering trees which meant I could easily shade from the sun as I followed the instructor. There were also a few huts surrounding it which meant I could lie at leisure, reading, watching others in the pool or writing. Then there were the beds on the beach. Not just your average deck chair but beds, with pillows. There was open air cinema on the lawn one night so we made ourselves comfortable at watched A Monster Calls. My favourite at the hotel was the beach party day. I limboed and danced from start to finish. 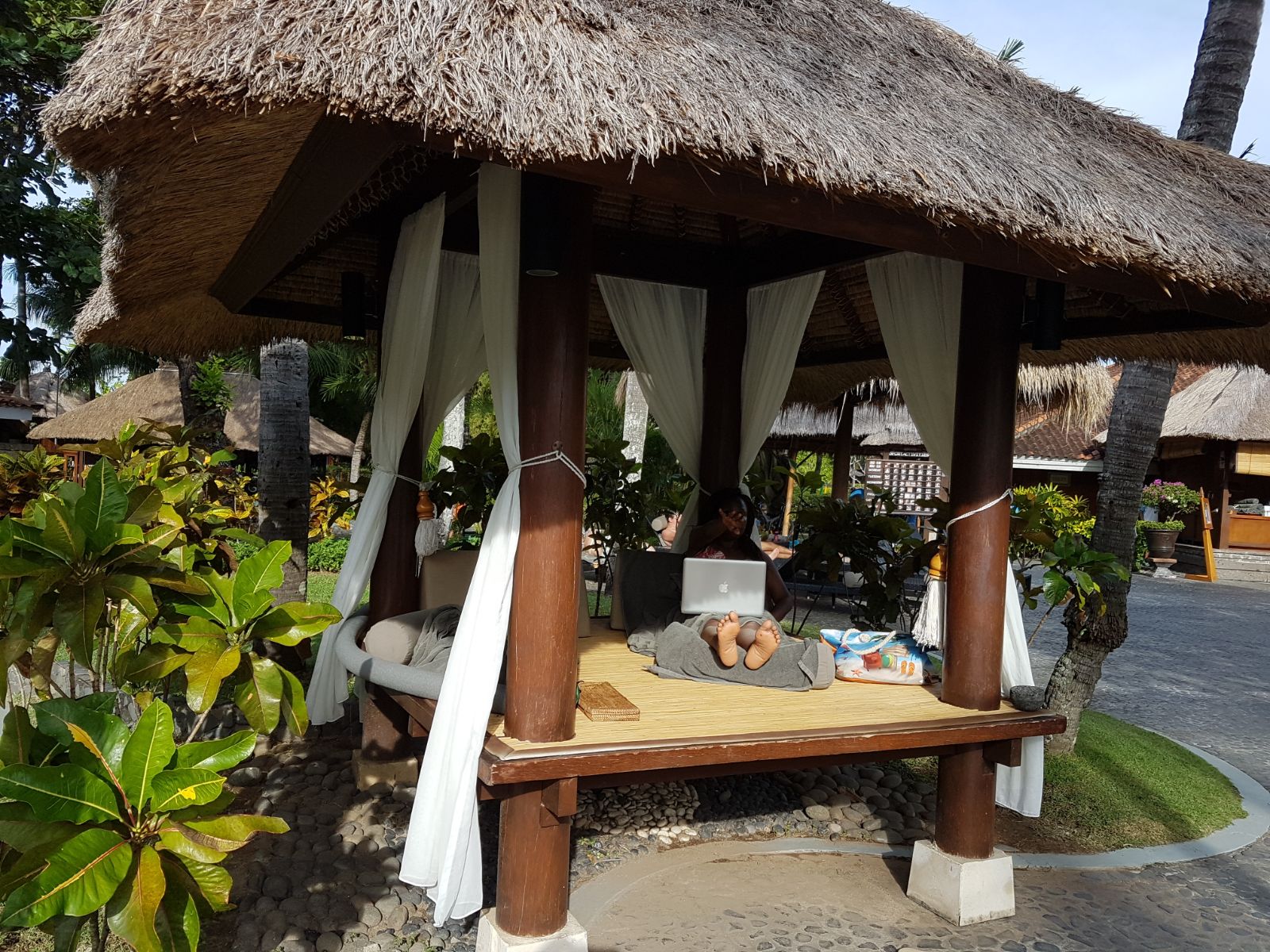