Lake District is still on the cards for later this month, but when the opportunity arose for an impromptu trip to Llandudno… well, you know me. 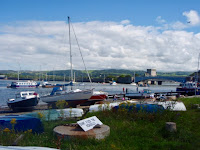 A return train ticket from London was an eye-watering £80 but preferable to driving.
My first stop was Conwy as I wanted to visit the Smallest House in Great Britain. Thankfully I wasn’t expecting too much and it was only a pound. People went in in their groups. I was alone so went in by myself which was just as well as it was small indeed. Disappointing as it was more 2 tiny rooms as opposed to and actual house. 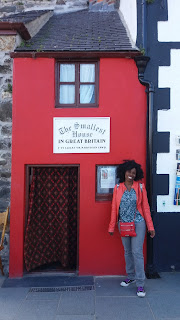 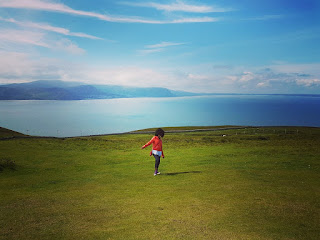 The Conwy Castle offers amazing views for miles around. Still, no comparison to the castle I visited last month.  I spent far too long at the book and arts fair and had to restrain myself from purchasing the hardback collection of rulers of the ancient world volumes 1 - 5 Nero, Cleopatra, Julius Caesar, Hannibal and Alexander the Great. Mostly as I’ve banned myself from purchasing books due to space but also they were large and heavy and I wouldn’t have been able to carry them.
When you see some old wooden stairs and decide to climb them without reading the info about where the stairs lead. I found myself up the Conwy Town Wall. Brave for me as it was very high up with only a tiny barrier blocking you from the steep fall. I took a couple of breaths, walked halfway, snapped a few photos so I could show I’d done it and left. If I hadn’t been alone I might have stayed longer but a racing heart so high up when by yourself is not the one. Though uncomfortable I had to admit the view was great.
The little seafront, though nothing special to look at, was lined with people. It was my intention to do a little boat cruise but the last one for the ay had been at 1.15pm and the next wasn’t until 11.15 the following morning, at which point I’d be exploring Great Ormey.
When it came time for a break I found a secluded bench on the bowling green with a spectacular view of the castle and sea. I sat for a while and read my novel, Atonement. 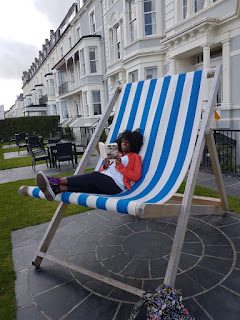 The hotel in Llandudno was a beautiful, new boutique hotel right opposite the promenade. It made for a scenic walk into the town centre in the evening for dinner. I could smell the fresh sea breeze all around me. I admired the bravery of those walking closer to the sea than I cared to get. Despite the bright, warm sunshine I knew the water had to be freezing cold. There were those walking their dogs - and praise God every dog was on a lead. I had heard something on the local news the previous night about fines for unleashed dogs which brought a contented smile to my face.

Great Orme was beautiful beyond description and sadly my camera could hardly do it justice. It’s a limestone headland on the north coast of Wales.  I reached the summit via the vintage tram which took less than 20 minutes and wasn’t as steep and scary as I had anticipated. The Great Orme Tramway dates back to 1902 when it was built to make it easy for visitors to reach the top. Had time been on my side, I would have loved to have walked up as I saw a couple of people doing. There’s a visitor’s centre but it seems largely geared toward children. 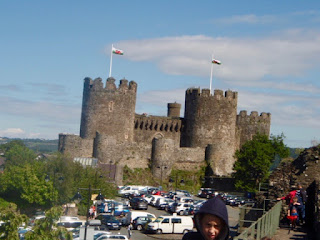 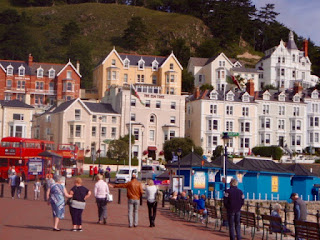 My favourite view was of the small church and cemetery with the tidy headstones and the sea in the background.  Lush, green landscape surrounded by bright blue sea and contrasting white, fluffy clouds. I was thankful the weather had held for another day as I read complaint after Facebook complaint from my London friends about the downpours and people having to put central heating on.

I decided not to brave the cable cars. Been there done that on enough holidays.

I befriended (from a distance) a little lamb who had strayed from the rest of the flock. I nicknamed him Chops and offered him shelter, but I think he saw through my front and knew exactly what I had in mind. 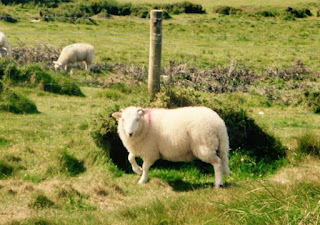 Had time permitted I would have loved to have visited the Bronze Age Copper Mines. And I would love to return again as I’ve learned it has one of the longest toboggan runs. 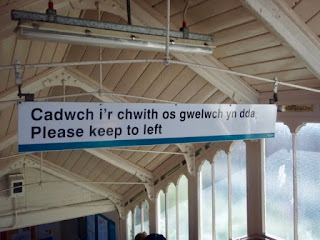 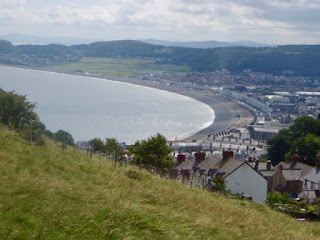 Food. I wasn’t culinarily amazed by anything I ate on this trip. There was a particularly good sticky toffee pudding from my hotel which I had for lunch on the first day and then there was an interesting Indian meal. I had decided it would only be right to enjoy some authentic Welsh lamb but then I really fancied an Indian. So I thought I’d have the best of both world by ordering Welsh lamb Benghal Handi from an Indian restaurant.